About 60 of us gathered Thursday afternoon at the Greene County Historical Museum in Jefferson for a historical society celebration of St. Patrick’s Day. There was storytelling, poetry, an enthusiastic sing-along, Irish-themed goodies and more.

You can learn more in the captions to the photos. 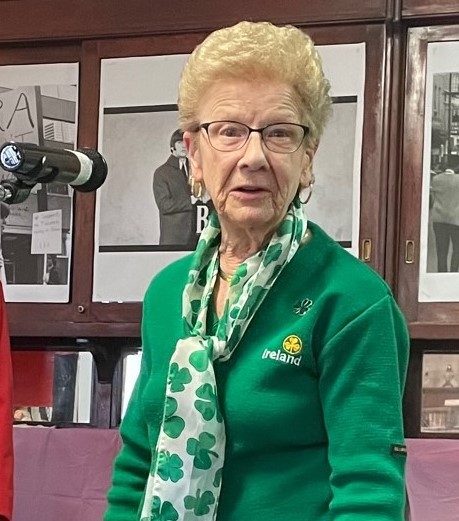 Greene County’s genuine Irishwoman Betty Kuebler, born and raised in Coleraine in Northern Ireland, reflected on her love for her homeland and many trips there. She’s been living here since 1957, when she came to visit an aunt who was a war bride of a solder from Scranton. 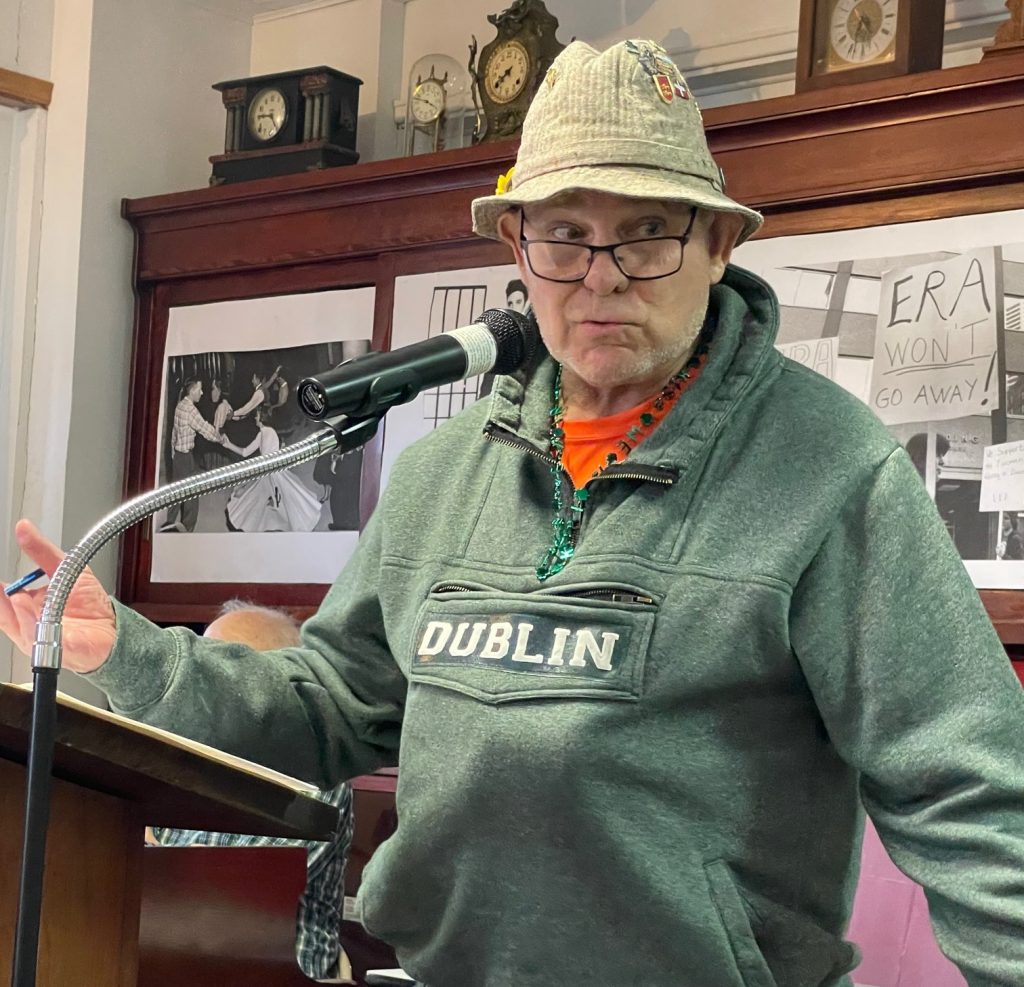 Johnny Turpin, retired teacher who has traveled Ireland, recalled visits to the most historic & popular Irish sites, then got into fun Irish tales. That’s his “travel hat” he’s wearing in this photo, along with a sweater from Ireland. 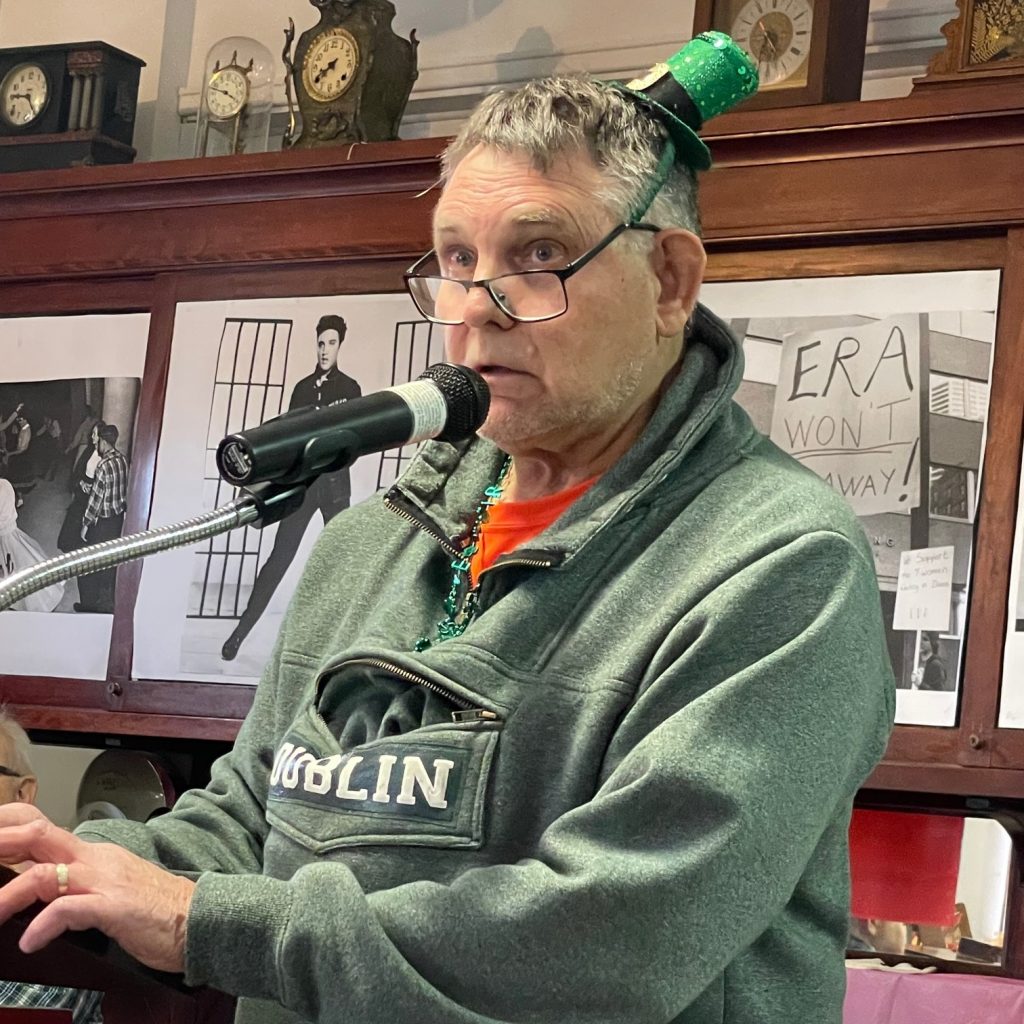 Johnny Turpin had several leprechaun stories and enhanced his Irish outfit for those. 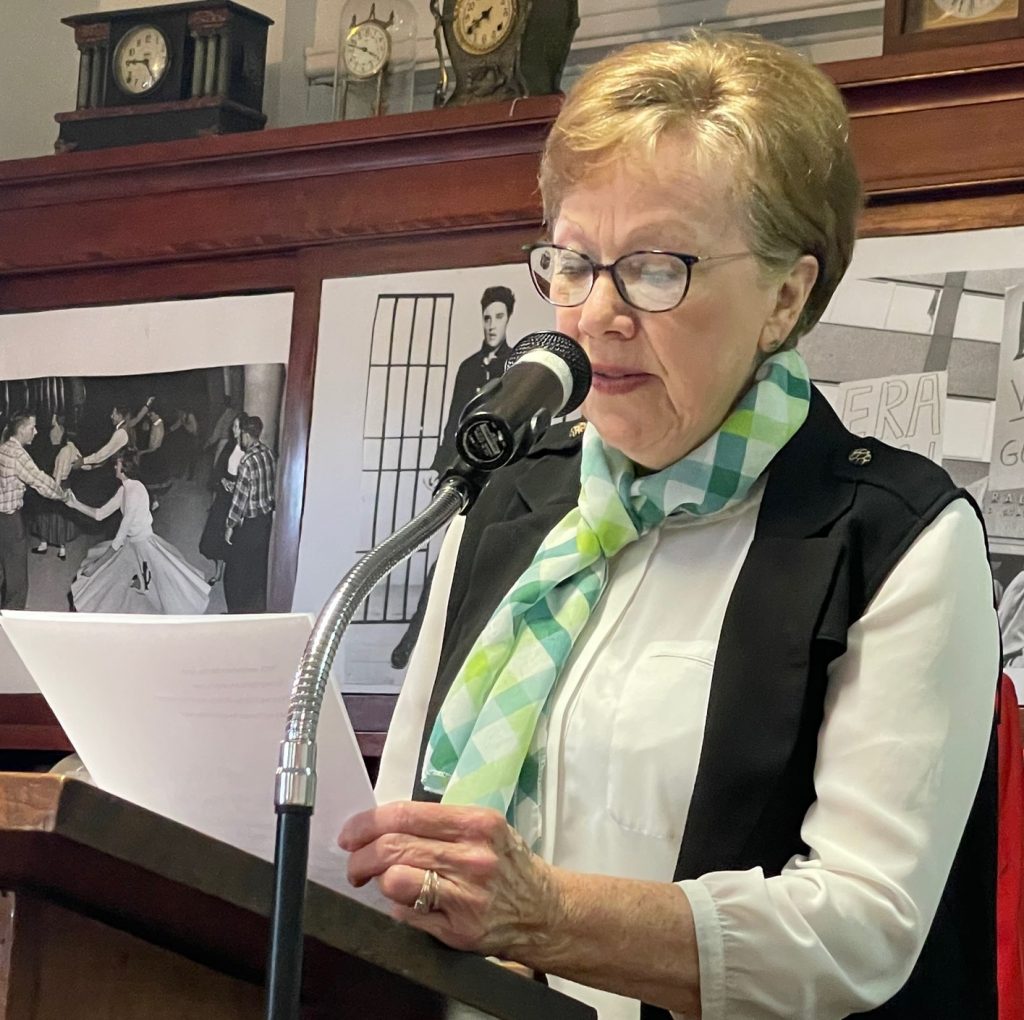 Hollie Roberts, an accomplished poet, was a courageous pinch-hitter on the program for her late husband Jerry Roberts, who had already committed to do readings at this event before he died in February. 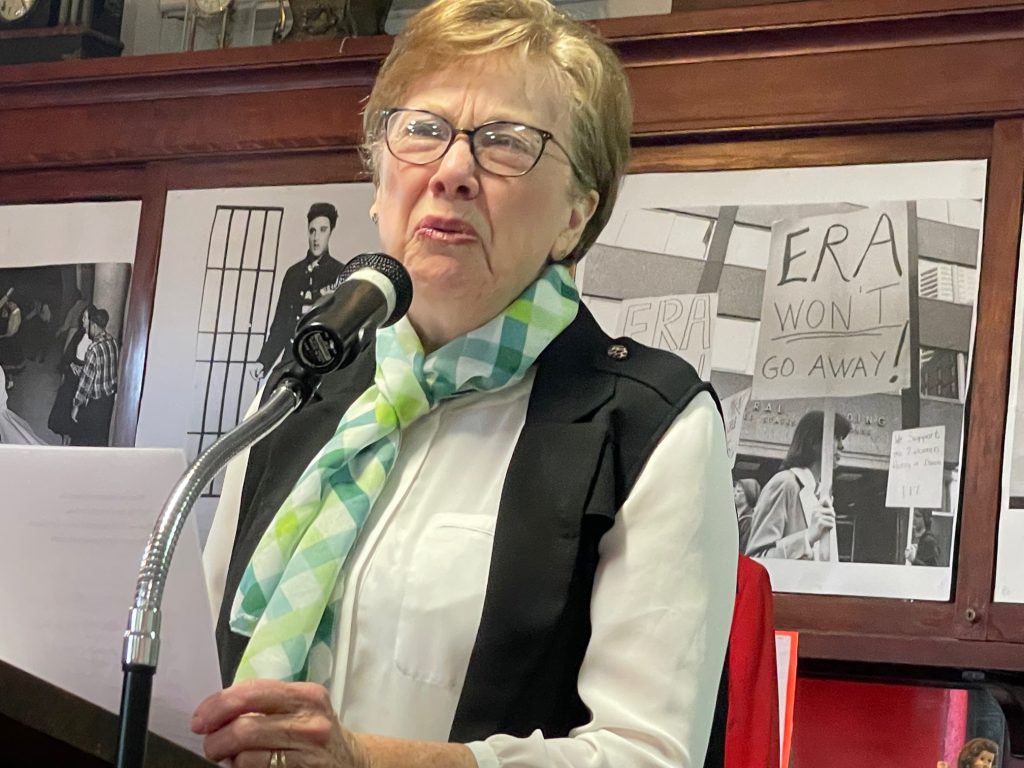 Hollie Roberts didn’t just read the Irish poem, “Drinking from the Saucer” by John Paul Moore. Beforehand, she visited with Betty Kuebler, our native Irishwoman, who coached up Roberts on how to do a proper brogue. And then she added perfect facial expressions, too! 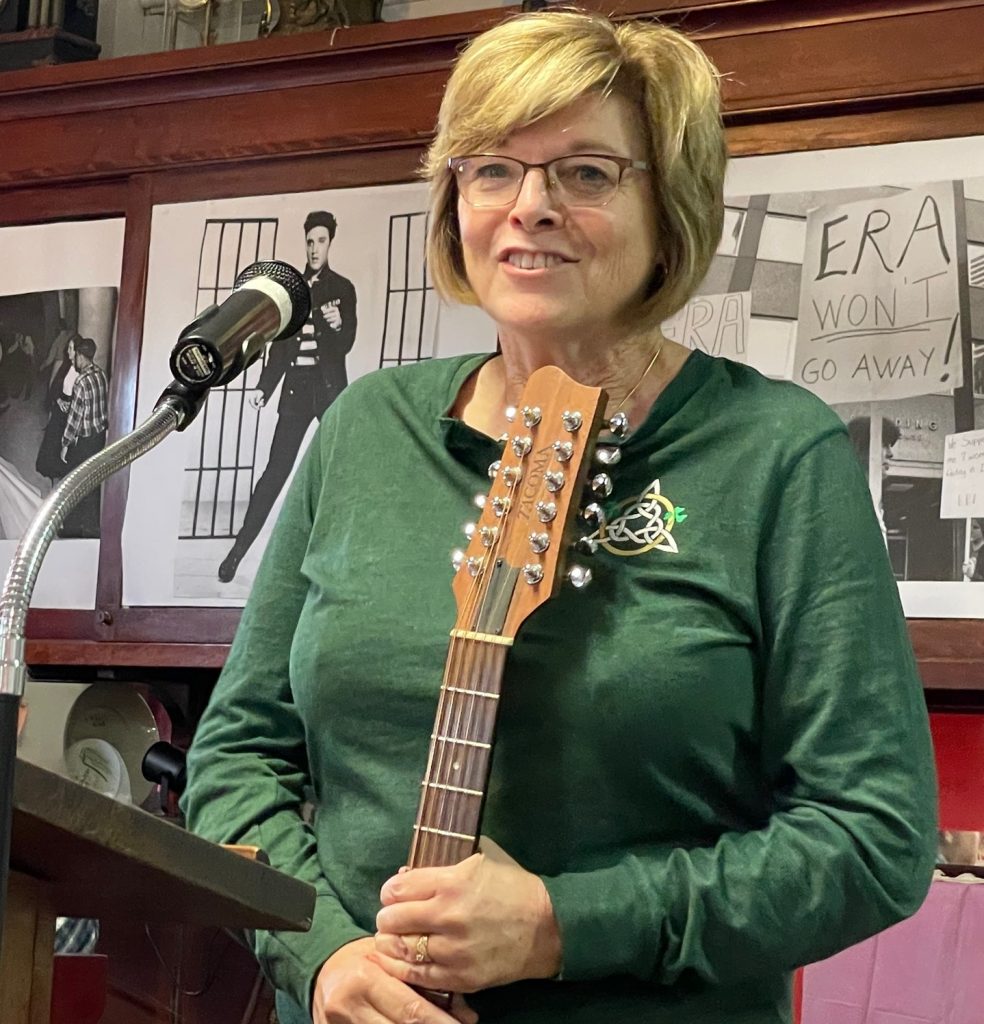 Peg Raney told how she grew up in the very Irish northwest Iowa town of Emmetsburg, where her father owned a well-known Irish bar where singalongs were frequent and spirited. Then she led the crowd in just such a singalong Thursday. 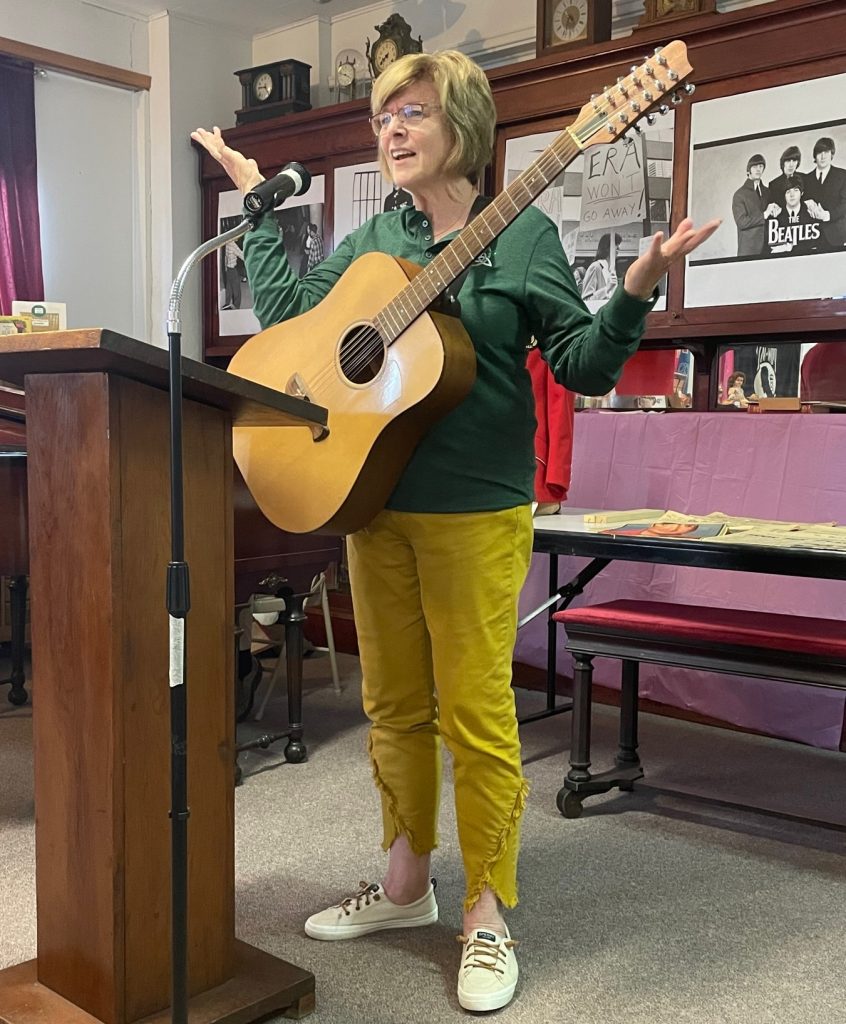 Peg o’ our hearts! Peg Raney, on 12-string guitar, joined Rick Morain on the piano in leading the crowd in a dozen traditional Irish songs. 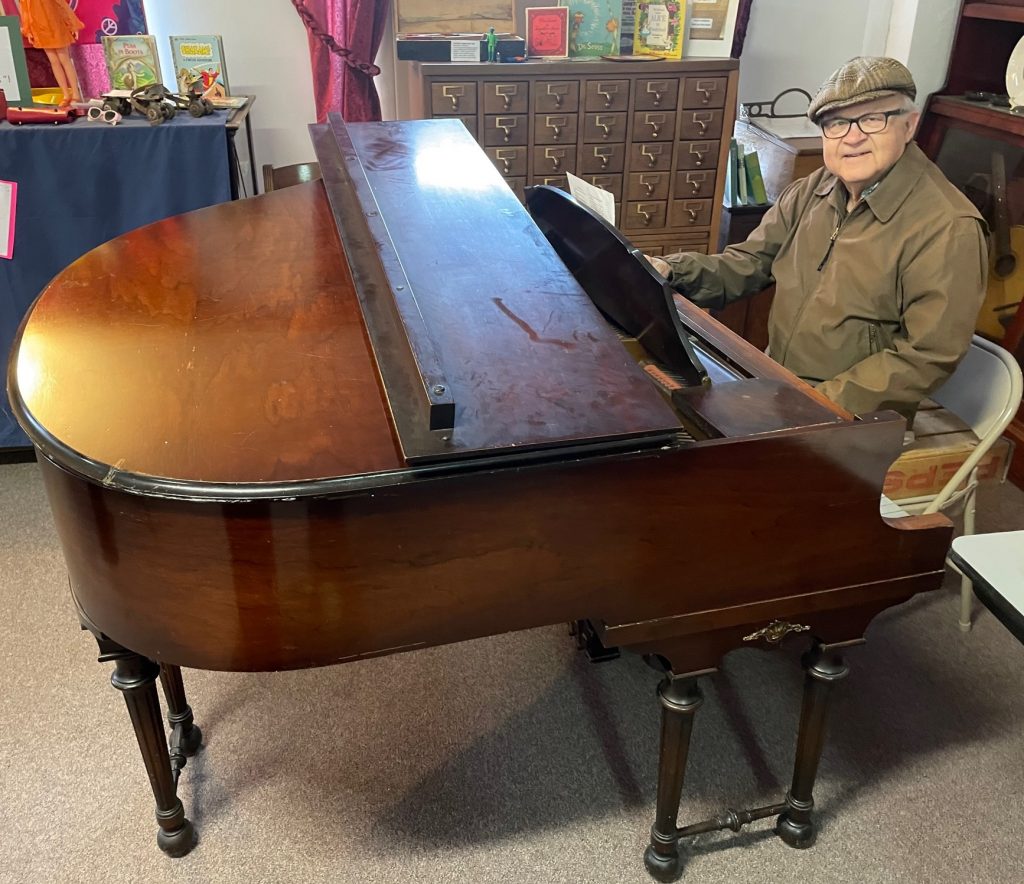 Rick Morain was masterful as ever on the piano, playing Irish tunes. The baby grand was recently fully-tuned for the first time in a while, and Morain reports it “now plays really well, and it has a good barroom tint to the sound.” 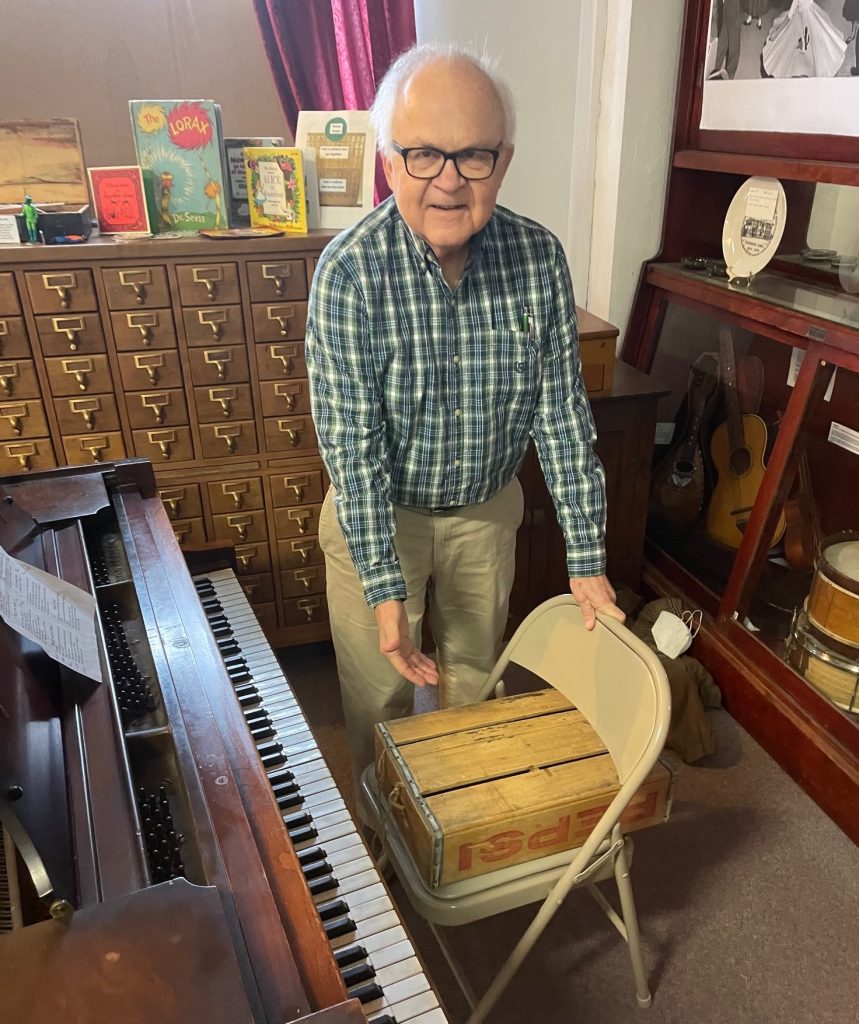 Here’s Rick Morain’s elevator chair for sitting at the right height for the keyboard of the museum’s baby grand piano. 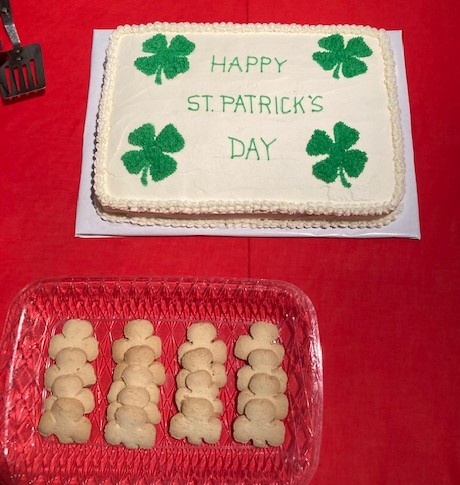 Part of the goodies at our St. Patrick’s Day program.