JEFFERSON, Iowa, June 6, 2016 — The Greene County Historical Society helped launch the 50th anniversary celebration of the Mahanay Memorial Carillon Tower in Jefferson on Sunday, June 5, with a program at the museum — and then a tour of the tower itself — that looked at the past, present and future of the iconic structure. 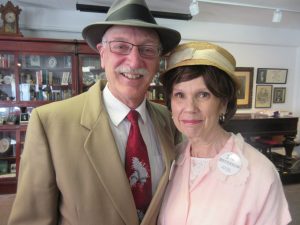 The highlight of the program was the appearance by Floyd and Dora Mahanay (despite being deceased since 1947 and 1962 respectively) who told their own story about what they were like, why they were so philanthropic toward our community, and why they decided on donating $350,000 for the bell tower that was built after their deaths. The Mahanays were portrayed by Don and Bonnie Orris, of Jefferson.

There is now a fundraising campaign underway to raise another $440,000 to complete the 4-octave, 47-bell carillon, which will be played from a keyboard or an automated machine.

Carole Custer, president of the Bell Tower Community Foundation, said Sunday she hopes that work can be completed by the Bell Tower Festival of 2017.
You can see more photos from this program on the Facebook page of the historical society.

You can comment on this story using the space below here.