JEFFERSON, Iowa, March 4, 2019 — The phone calls and even visits from leaders of other small towns across Iowa come often now for officials of the city government and the Jefferson Matters Main Street program. They want to know how Jefferson is successfully saving and redeveloping the 100-plus-year-old buildings around its courthouse square.

Nick Sorensen, who is the City of Jefferson “building officer, zoning officer, code enforcer and special projects coordinator,” says part of the answer is the leadership of Peg Raney of the Main Street program. Part of it is the commitment by the city government, and finding funding from state and federal governments, too. A key factor, he says, “is a core group of volunteers willing to get in there and get after it.”

My own observation is that a big reason the historic old buildings are being salvaged and re-purposed is that 38-year-old Nick Sorensen isn’t afraid of them.

He is going to talk us through all that in a Greene County Historical Society program about notable buildings and restorations around the square at 2 p.m. on Sunday, March 10. While most historical society programs in Jefferson are held in the museum, Sorensen’s is being moved to the rotunda of the Greene County Courthouse.

“Two reasons for moving this program to the courthouse,” said Roger Aegerter, the society’s executive director. “First, since this program is about our historic buildings, it seemed appropriate to hold it in our beautiful courthouse. Second, we are getting ready to do reconstruction of the ceiling support system in our 102-year-old museum building, and the work may be started by March 10.”

Sorensen said a focus of his presentation will be about three restoration efforts underway now involving three to six buildings, depending on how you count them. Those are “City View on State” at the northeast corner of State Street and Chestnut Street; the “Harness Shop” at 205 N. Wilson Avenue, and “The Arcade,” or former Pizza Ranch, also on N. Wilson.

But he can discuss the possibilities with all the 40 or so buildings around the square and the 92 that are part of the Main Street District.

Sorensen has lived and worked in Jefferson since the fall of 2003, when he joined the Jefferson Police Department. In 13 years with the police, he became a sergeant “and loved being around the guys, the camaraderie, and being of service.” When the building inspector position opened in city government – along with his other duties – he felt a tug on his heart. “I went to Dave Morlan, who was my chief and my mentor, and told him about how interested I am in old buildings,” Sorensen said. ‘He said, ‘If this is something you really want to do, go for it!’ ”

He’s now been on the new job since June of 2015. He was very involved in the façade refurbishment of 13 buildings in 2016 and 2017 with a Community Development Block Grant, and several others since then. 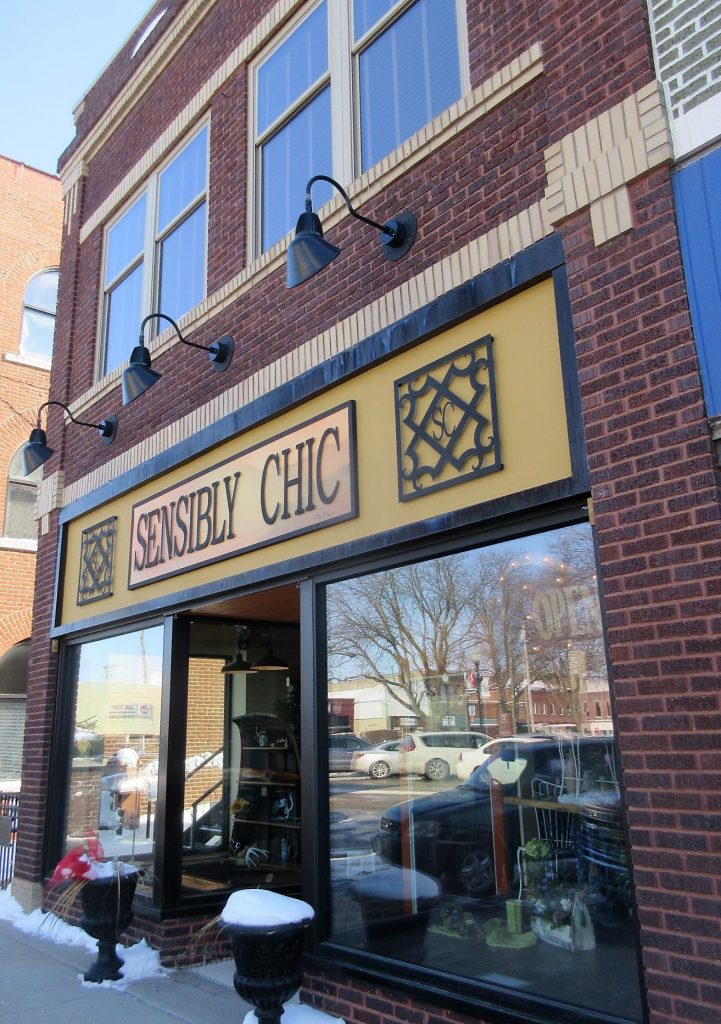 Nick Sorensen says the successful renovation and re-development of the Sensibly Chic building by the Tuckers on the south side of the square in Jefferson shows what can be done with old buildings that have been in various stages of dilapidation.

What is it about old buildings for Sorensen?

“I grew up in Exira, and learned a lot about construction from my dad Larry Sorensen and my grandpa Charlie Sorensen,” Nick said. “They both were roads workers, but my dad was also a mason for several years, and I learned masonry from him. Grandpa Charlie retired from the Iowa DOT when I was in high school, and he saw that there weren’t a lot of jobs available for high school kids to earn some money. So he started up a little construction company to do roofing, painting, flooring, cleaning, changing light bulbs for grandmothers – whatever was needed – and he hired a bunch of us high school kids.

“We did a lot of work at rental properties that Judith Sutcliffe had around the area, and she was really big into historic preservation and renovation. Her sister had a downtown building we were working on in Audubon, and I remember when I walked into the big empty room on the second story, I thought, ‘Why is this great space not being used for something?’ And that always stuck with me.”

So, there’s no fear when he’s starting to work on saving buildings that, in some cases, previous owners have walked away from?

“No, when you jump in and start working on them, you get over that,” Sorensen said. “Digging into them, you gain so much knowledge. You see how well they were put together and how, with a little work, they can have years of good use, decades, or even longer. When you get the work done and you see businesses doing well in them again, it’s very satisfying knowing you’ve been part of it.”

Is he confident enough of the potential that he’d like to own one of the old buildings on the square and redevelopment it for himself?

“Absolutely, if I could afford it,” he said. “I’d put in some neat second-story apartments, recruit a business for the main floor, and then start trying to get the building next door. This downtown is coming alive.”

Just as for the historical society’s programs at the museum, there is no admission charge for this special program in the courthouse rotunda and there will be free refreshments, too.

Photos below here show the buildings in the business district that Sorensen says are now works in progress — and which he will be talking about during his March 10 program for the historical society. 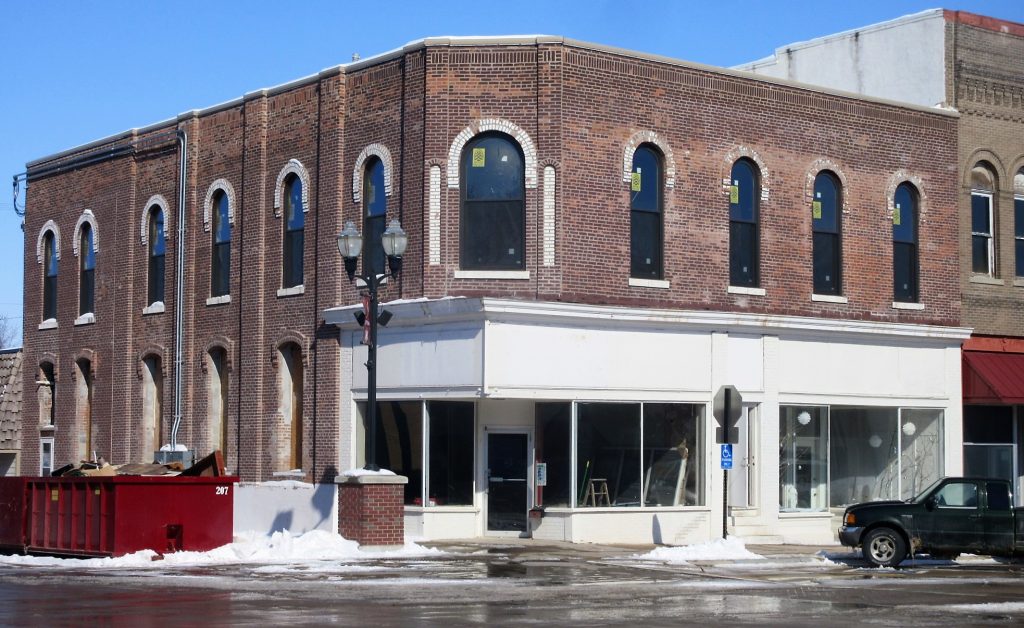 “City View on State” at the northeast corner of State Street and Chestnut Street. 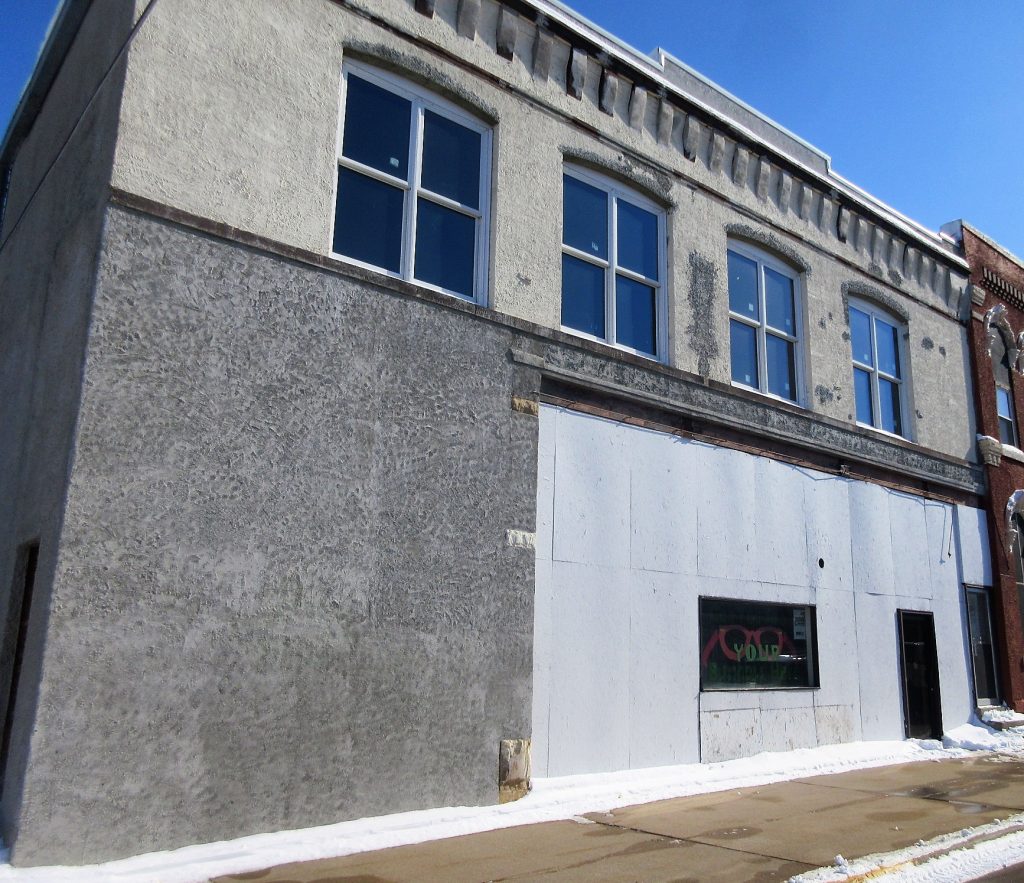 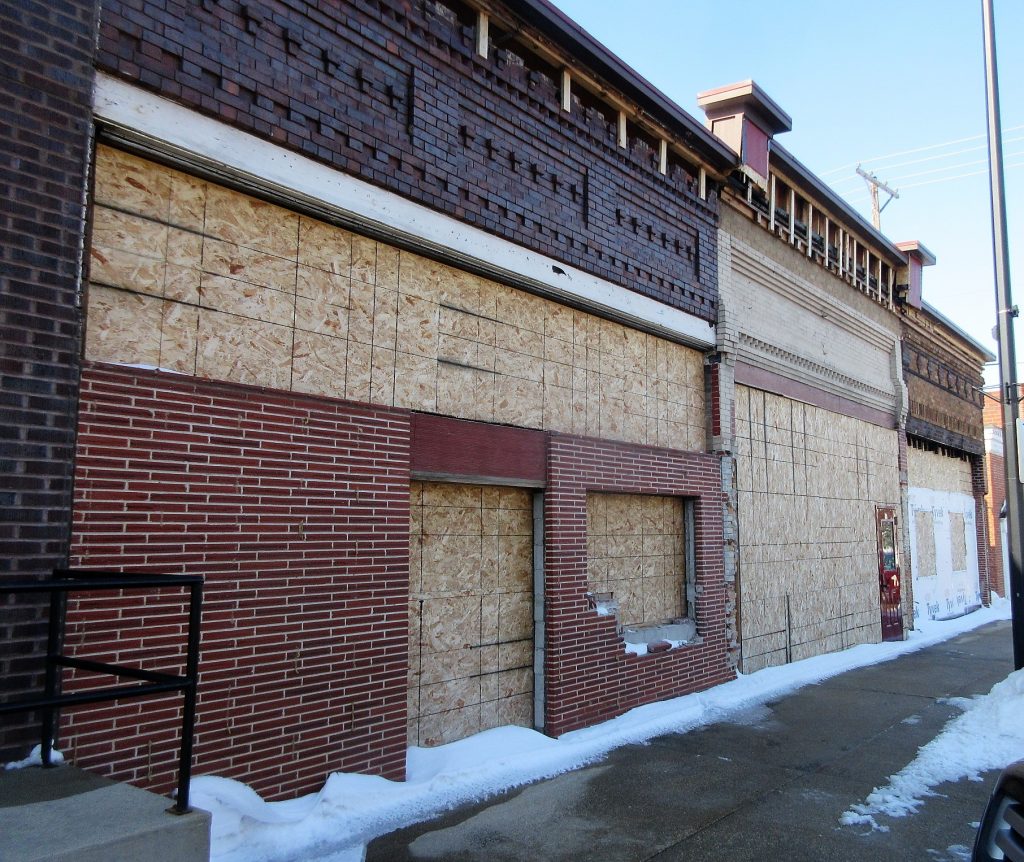 “The Arcade,” or former Pizza Ranch, also on N. Wilson.