RIPPEY, Iowa, Sept. 26, 2018 — In the fall of 1966, Greene County hosted a 2-day “Agri-rama U.S.A.” showcasing the newest and best equipment available for farming, as well as enhancements for rural life — and more than 150,000 people attended! There were also plowing competitions, which from the late 1940s to the early 1980s were very popular across the U.S. Farm Belt as well as in other nations where agriculture was big.

Three Rippey-area natives — Roger Norgren, Robert Huber and Steve King — were involved in those events with their families, and they’ll tell their stories when the Greene County Historical Society meets on Friday, Oct. 5, at the Rippey United Methodist Church. Retired journalist Chuck Offenburger, a member of the historical society’s board of directors, will moderate the discussion.

People are welcome to bring photos and memorabilia from those events. 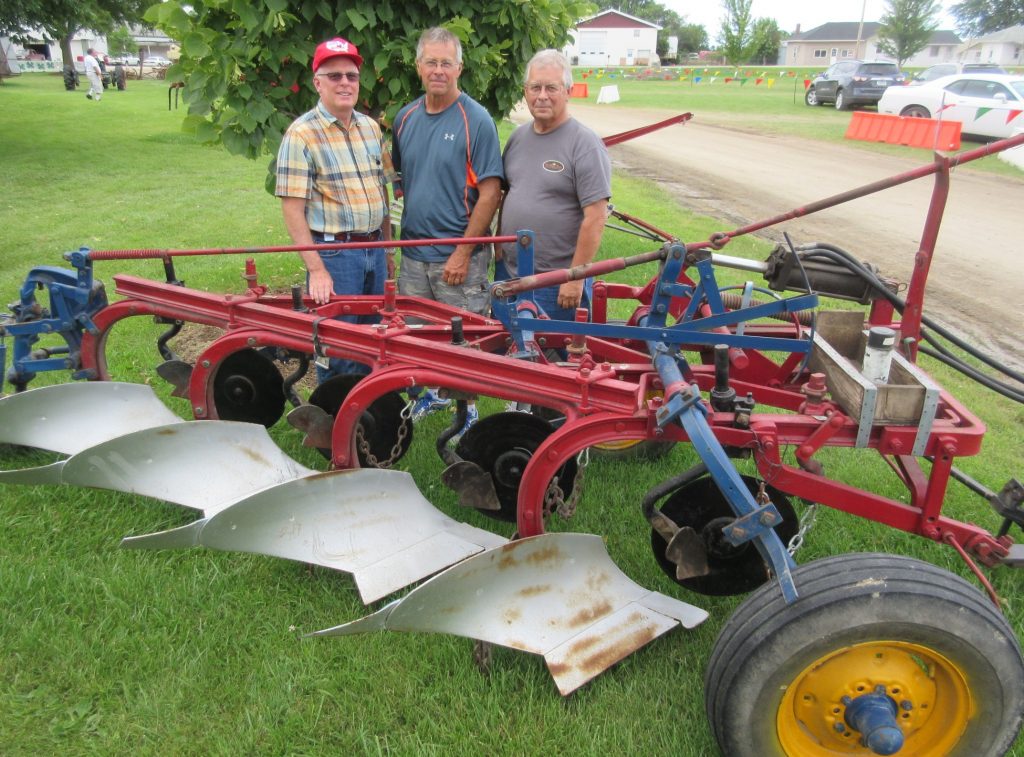 These three will share stories of Greene County’s colorful agricultural heritage when the county’s historical society meets Friday, Oct. 5, in Rippey. Left to right, they are Robert Huber, now of Cedar Falls; Roger Norgren, of Rippey, and Steve King, of Ogden. As Rippey-area farm boys, all were around “Agri-rama U.S.A.,” a huge farm show and plowing competition which, on two days in the fall of 1966, attracted more than 150,000 people to a special exhibition grounds east of Jefferson. Norgren and King went on to become national plowing champions, as did Huber’s father, Lawrence Huber. All three champions at one time or another used this very plow they’re standing with, which the historical society displays at the Greene County Fairgrounds.

Norgren, King and Huber were all introduced to Agri-rama U.S.A. and competitive plowing by Huber’s father, the late Lawrence Huber, who farmed three miles west of Rippey, in the area of Squirrel Hollow Park.

Agri-rama was a promotion by Greene County agricultural and development leaders. It was much like today’s huge Farm Progress Shows, with major displays by ag business companies as well as the plowing competitions and other farming demonstrations. There was live entertainment, even a fashion show, and a visit by U.S. Vice-President Hubert H. Humphrey. The event was held on 1,100 acres of land just east of Jefferson, around and across the highway from the Jefferson Municipal Airport, and there was so much airplane and helicopter traffic that the Federal Aviation Administration built a temporary control tower on top of one of the hangars.

The weather was nearly perfect both early-September days of Agri-rama, and the largest crowds ever assembled in Greene County turned out – estimates ranged up to a total of 182,000.

“Those were pretty progressive local leaders who got behind that,” said Robert Huber. “They put together quite a show!”

Lawrence Huber, Norgren and King – all farmers for much or all of their careers – each won a national plowing championship over the decades. Robert Huber, who became a teacher and then guidance counselor in Cedar Falls, didn’t devote as much time or attention to participating in the sport but has always been a fan. Lawrence Huber died in 2012. Today, Norgren still lives and farms near Rippey, King lives near Ogden and is a trucker, and Robert Huber is retired in Cedar Falls.

Another national champion, Dallas Bowman, grew up in the southwest part of Greene County but wound up competing after he was farming in the Adel area.

For the Oct. 5 historical society event, there will be an $8 lunch at the church at 12 noon, with RSVPs for members due with their community contacts by midday Wednesday, Oct. 3. Members of the public who want to eat lunch for $10 should phone vice-president Nancy Hanaman at (515) 436-7684. The 1 p.m. program at the church is free and all are invited.