JEFFERSON, Iowa, July 9, 2018 — The Greene County Historical Society joins in at the Greene County Fair here later this week with two days of storytelling in “history chats,” displays of classic farm equipment and the humble accessories of early rural life, tours and explanations of a historic one-room schoolhouse, and a free ice cream social late each afternoon.

The society’s exhibits building on the fairgrounds will be open Friday and Saturday, July 13 and 14, from 10 a.m. to 7 p.m.

“The displays at our historical building at the fair showcase the agriculture of Greene County in the early to mid 1900s,” said Roger Aegerter, executive director of the society. “There are displays of hand tools used around the farm to plant and harvest crops, maintain equipment, and tools that are used in the farmhouse to produce hearty meals for the family and farm hands.

“There are also much larger machines that trace the historical rise of crop production in Iowa,” he continued. “Plows, combines, tractors, steam engines, and a variety of machines that many people remember using in their early years. A slow walk through and around our building will take you back to times that have been described as both ‘better’ and ‘much harder’.”

In addition, the “Bristol No. 7” country schoolhouse next door on the fairgrounds will be staffed those same days by Marilynn Hoskinson and Becki Cunningham, portraying early teachers, with explanations of what rural education was once like in the county. They’ll be there from 9 a.m. until 6 p.m. Both Hoskinson and Cunningham attended country schools. 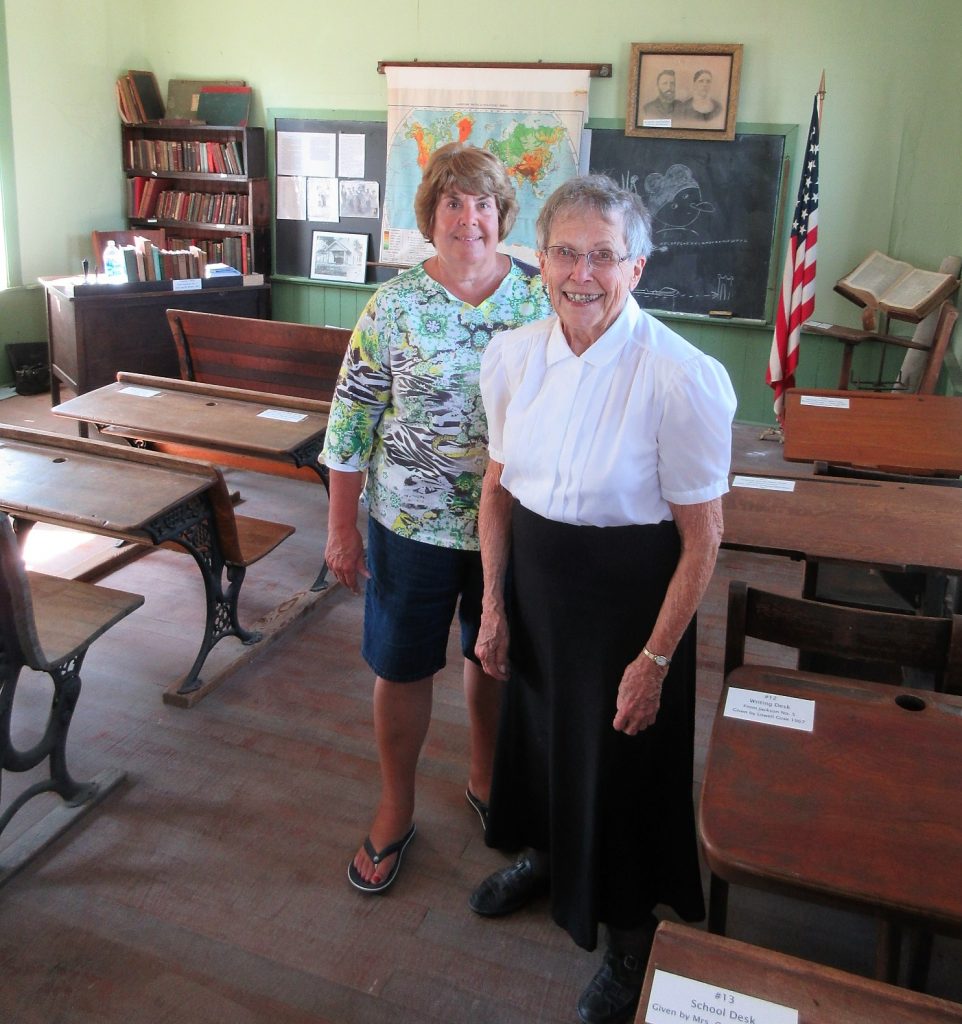 Becki Cunningham and Marilynn Hoskinson are presenters in the old country schoolhouse on the fairgrounds.  Hoskinson, who is 90, has portrayed a school teacher for years at the fair, telling fair goers what education was like in the one-room schoolhouses.  She says she’ll bow out of the role after this year’s fair.

The schoolhouse was built in 1874, restored by the historical society in 1967 and repaired again in the last two years by the organization. It is also known as the “Minnihan Schoolhouse,” after the family that owned surrounding land and donated the building for re-location to the fairgrounds.

In special programming, the historical society will sponsor “History Chats” for a fourth consecutive year. There will be six different chats on topics of local history, with moderators Chuck Offenburger and Jerry Roberts, both retired journalists, asking questions of a small panel of people with expertise on each topic. Questions and stories from the audience will be encouraged, too.

“For each of these history chats, we hope people with some knowledge and stories about the topic will attend for these discussions, which will be more like conversations than interviews,” said Offenburger. “We’ll sit in a circle of chairs, Jerry and I will get the chat started, and we’ll do our best to draw stories out of the people there. One reason we like to do this is because we usually hear about historical moments or incidents we’ve never known before – and that sometimes leads us to full-blown programs later on for the historical society.” 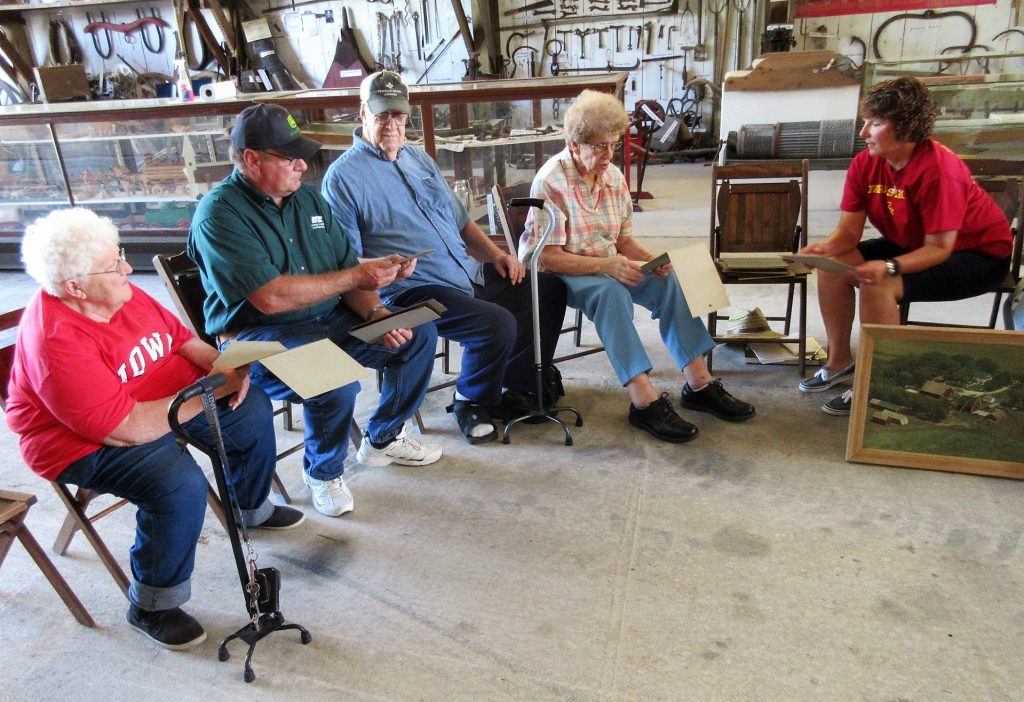 A discussion during one of the “History Chats” at the 2017 Greene County Fair — this one about the Hornick brothers of rural Churdan who operated a private bank to help their neighbors and some businesses.

Here are the days, times and topics for the history chats:

11 a.m. – Greene County Fair general history
1 p.m. – History of the community of Rippey.
3 p.m. – The Jim Doran story, profiling one of Greene County’s greatest athletes, a native of the Paton area, with his son Jim Doran Jr. as special guest.

At 4 p.m. on both Friday and Saturday, there will be free “Hanamans’ Historic Homemade Ice Cream,” made by historical society president Dale Hanaman and vice-president Nancy Hanaman. Cookies, too. 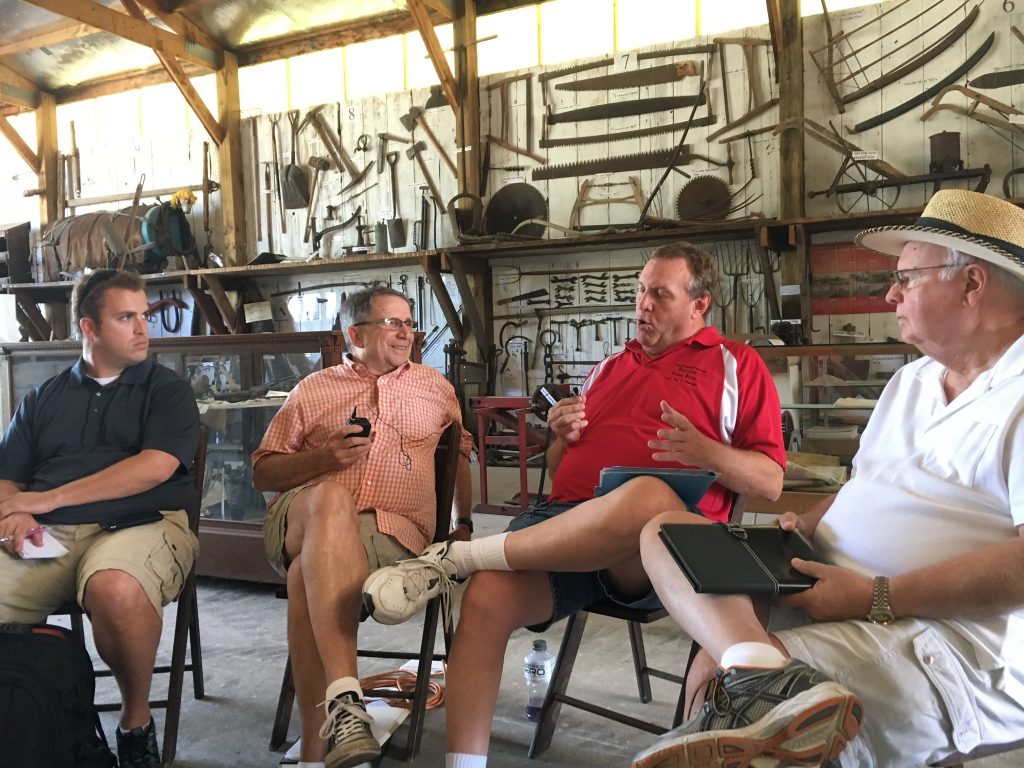 In another of the “History Chats” at the 2017 Greene County Fair, KGRA radio sports director Doug Rieder tells favorite sports stories from his long career here.  Looking on from the left are Brandon Hurley, sports editor of the Jefferson Herald, Chuck Offenburger and at the right Jerry Roberts.  Offenburger and Roberts are co-hosts of the history chats.