GRAND JUNCTION, Iowa, July 29, 2019 — There’s a Friday-Sunday doubleheader of local history programs coming this weekend, both in Grand Junction, as that town celebrates its sesquicentennial.

On Friday, Aug. 2, Mike and Dianne Piepel, of Jefferson, are presenting the “Theaters in Greene County,” with a 12 noon lunch for those who RSVP and pay, and the free program at 12:45 p.m., both in the Grand Junction Community Center. This will be the historical society’s normal monthly meeting.

On Sunday, Aug. 4, Alan Robinson, of Grand Junction, will present “Grand Junction: 150 Years of Transportation and Transitions” at 1 p.m. at the community center. This free program is co-sponsored by the historical society and the Grand Junction Sesquicentennial Committee.

Mike and Dianne Piepel, 1970 classmates at Jefferson High School and then at Mankato State University in Minnesota before they married, have been movie fans since childhood, probably Mike more than Dianne.
“As a boy, going into the Iowa Theatre – which is now the Sierra – for their weekend matinees, I just fell in love with films,” Mike said. “At Mankato State, we had a new student center, and I got involved with the committee that booked the movies, dances, concerts and all that, and I always enjoyed working on the movies the most.”

That interest continued as the Piepels moved on for graduate school and teaching at the University of Southern Colorado and at South Dakota State University. After 15 years away, the couple returned to Jefferson when Mike landed a job at American Athletic Inc. He also taught social studies at Des Moines Area Community College, was elected Greene County auditor for 12 years in the late 1980s and ’90s, and finished his career in rural route delivery for the U.S. Postal Service, where he recently retired. Dianne served as middle school librarian for 23 years, and that helped develop and sharpen her skills as a researcher.

Mike said the research into all the movie houses that have operated in Greene County taxed both his knowledge of movies and Diane’s research abilities. “We’ve spent six months digging into this since Roger Aegerter (executive director of the historical society) asked us if we’d be interested in doing this,” Mike said. “Dianne got into the archives of the newspapers in Jefferson, Grand Junction, Paton, Scranton, Rippey and Churdan.”

They found that all but the tiniest of our towns had at least one, and some towns have had several through their history. “Jefferson had three or four movie theatres operating at the same time, and Churdan once had two going at the same time,” Mike said. “And in some of the smallest towns, we found mentions of how the local people were going to show movies on the sides of business buildings, with people sitting outdoors on benches or blankets.” 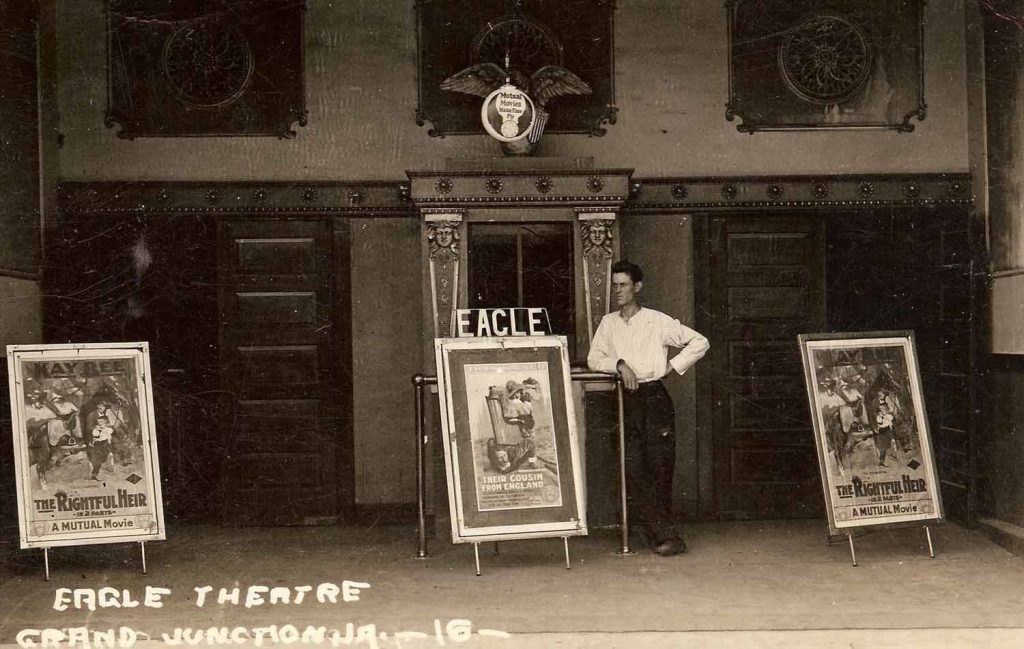 The Eagle Theatre that served Grand Junction in about 1914.

Many of those theatres were built as opera houses, and the films came to them later. The crown jewel of all those entertainment houses is today’s community-owned Sierra in Jefferson, which opened in 1884 as the Head Opera House. It has operated continuously for public entertainment for 135 years. Mike Piepel serves on the board of directors of the Sierra.

Preceding Friday’s program on the theatres, there will be a lunch by the Horizons organization in the community center at 12 noon, $8 for historical society members and $10 for others who are not members but would like to eat with the group. Historical society members should RSVP about lunch to their community contacts by Wednesday noon, July 31, and others who want to have lunch should RSVP to board member Margaret Hamilton at (515) 386-4408.

In Sunday afternoon’s program, Alan Robinson will present some amazing stories about his hometown of Grand Junction’s history with transportation and the impact that has had on the town’s growth, decline and re-development over its 150 years.

Robinson, a 1973 graduate of East Greene High School in Grand Junction, went on to study journalism at Drake University, then eventually earned his degree at New York University. He worked as a reporter and editor for newspapers and magazines in Wapello, Sheldon and Storm Lake in Iowa; in North Myrtle Beach and Pawleys Island, South Carolina, and for 20 years in New York City. He also had two hitches in public relations at colleges along his way.

He moved back home to Grand Junction in 2011 and has been very active in Greene County organizations since then, including serving now on the Grand Junction city council. He works now as a guest services rep (“fancy words for front desk clerk,” he said) at the Cobblestone Hotel & Suites in Jefferson.

Development came fast in Grand Junction after the east-west railroad mainline came through Greene County in 1866. Within a couple years, it was determined that a north-south rail line, from Missouri through Des Moines and on to Minnesota, would be built through what is now Grand Junction.

“Once the rail reached from Des Moines to the intersection with the Chicago & North Western, things moved fast for Grand Junction,” Robinson said. “It was a boom town. Over 60 buildings were constructed in just four months in late 1869. The town went from population 0 to 444 in Year 1, and doubled again in just a few more years.”

Ever since, Grand Junction has been dealing with changes in transportation and economic diversification. The population once hit 1,100, but by 2017 dropped to 784. The town remains a major rail center, now is positioned on the front edge of agricultural evolution, too – with the French-owned Louis Dreyfus ethanol plant on the north and electricity-producing wind turbines south of town.

Grand Junction’s story is a fascinating one, and Robinson probably knows it better than any current citizens.