JEFFERSON, Iowa, July 14, 2020 — The Greene County Historical Museum in Jefferson was closed throughout the spring by threat of the corona virus but re-opened for Saturday mornings in July.  It is now being closed to the public again – until further notice.

“The uptick in COVID-19 cases in surrounding counties is one of the main factors in our decision,” said Roger Aegerter, executive director of the Greene County Historical Society.

He added that he and society president David John looked “at many factors related to the museum being open, and agreed that the negative factors out-number the good things. So at this time, we are closing down the museum until further notice.”

There were few visitors when the museum was open on the first two Saturday mornings of July.

JEFFERSON, Iowa, July 8, 2020 — Roger Aegerter has long been intrigued by the historic Lincoln Highway.  Maybe it’s because for 42 years, he has lived just a half-block of the highway’s route as it goes through Jefferson. Over that time, he’s driven nearly the entire route, from its beginning in New York City to its finish in San Francisco.  And now he’s painted it!

Aegerter, a former art teacher, school administrator, working artist and for eight years the executive director of our Greene County Iowa Historical Society, had been thinking “a couple of years” about doing a public art project on the highway, and decided in March it was time to act.  He talked to the City of Jefferson streets department officials about the idea, got their permission and arranged to borrow the paint sprayer they use for traffic markings on local streets.

Then he went to work on the math part of the project.  He wanted to paint the 3,389 miles of the trans-USA highway “in scale” on the 295-foot-long sidewalk of one block of East Lincoln Way in downtown Jefferson, so some calculating was required.  “So one foot on the sidewalk is the equivalent of 11.5 miles on the real route,” Aegerter said.

That sidewalk is on the block just southeast of the courthouse square in Jefferson, so it extends past the Thomas Jefferson Memorial Gardens, the Stitch quilt shop and the Greene County Historical Museum.  And both East and West Lincoln Way in Jefferson are the actual route of the original Lincoln Highway.

Aegerter gathered his paint — “regular outdoor latex paint” — other equipment, then scheduled around other commitments and activities so he would have plenty of time in the last week of June and first week of July.  He was blessed with mild weather.  Since he was using spray paint, he generally painted in the early morning and evening, “when winds are almost always lighter and it’s usually 10 degrees cooler, too.”

Another artist Jolene Peters, who operates the “Art on the Fly” studio in Jefferson, volunteered to cut stencils with the names of 13 towns and cities that Aegerter wanted to paint on his highway, to help people know its real route.

On the sidewalk, the highway is painted as a 15-inch-wide green strip, but it meanders as it goes the length of the block. “Where the real highway route goes, so does the green highway on the sidewalk,” he said.

He also painted a representation of the borders of Iowa on the sidewalk, and people will note that it seems extremely wide.  “The width of Iowa really is in scale there,” Aegerter said. “When you think about it, the Lincoln Highway route across Iowa is about 350 miles long, so it really is about 10 percent of the entire highway route across the U.S.”

Total cost of the project wound up being $200, he said, and that was paid from the budget of the Tower View Team, which promotes public art for the Jefferson Matters Main Street program.

“When all I had done was the green strip for the highway, and it was kind of bending and curving the length of the sidewalk, I heard a couple of guys speculating that this might be a walkway where the police officers could give people sobriety tests,” Aegerter said. “Since I got it done, it’s been kind of neat to see a couple of kids riding their bicycles there, trying to stay on the green highway.”

He and his wife Jan drove the east half of the Lincoln Highway over the years, as part of several different trips they took to various locations in the U.S.  In the fall of 2016, Roger drove the route from Jefferson to San Francisco in three and a half days.  He then drove to Seattle, where Jan flew in to join him.  Then they made a leisurely drive back to Jefferson via a northerly route. Roger did a historical society program on that trip, with great photos, in August, 2017. 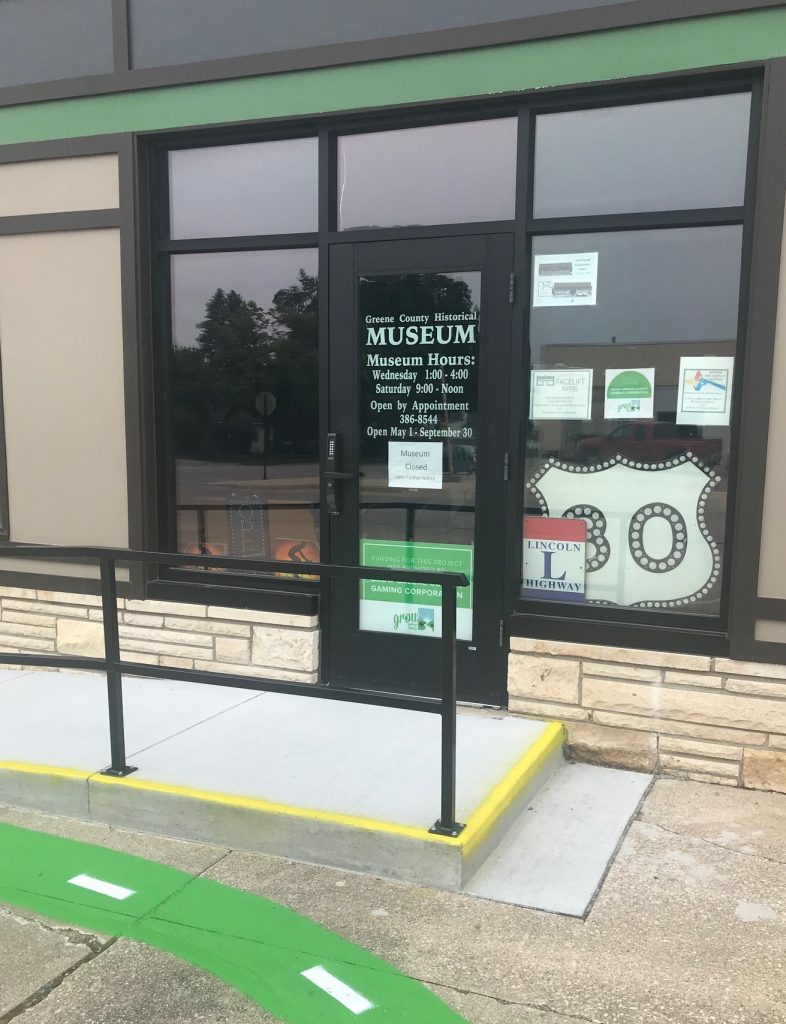 The art highway, just like the real Lincoln Highway, goes right by the front door of the Greene County Historical Museum. 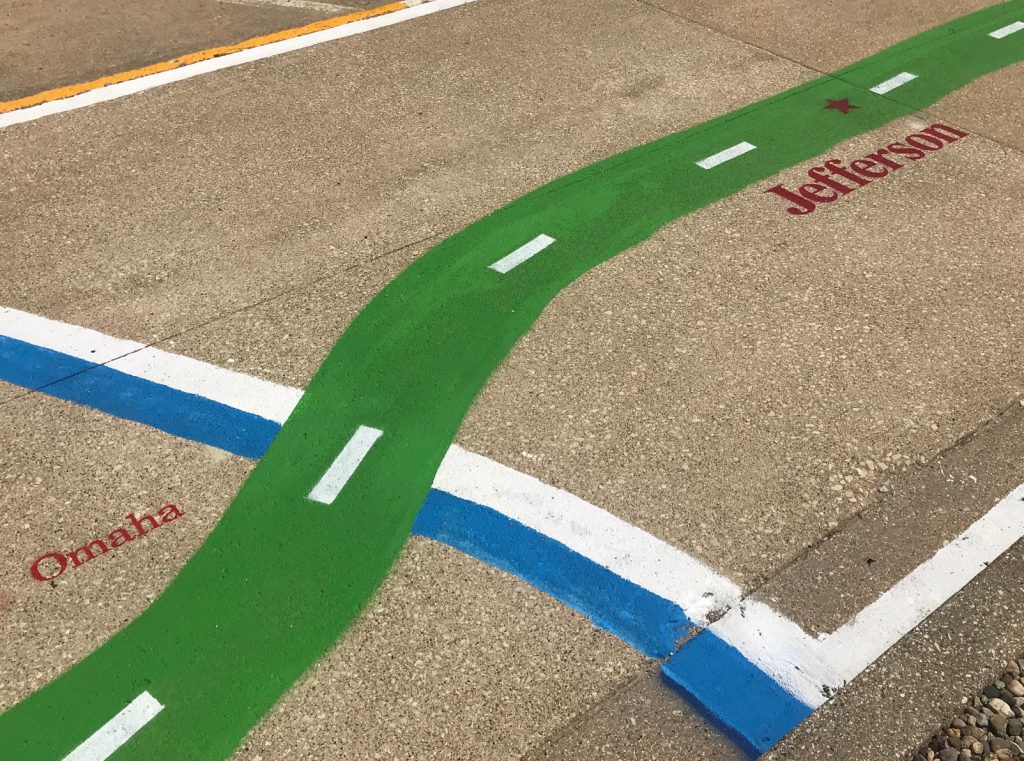 Note the names of the cities along the way.