RIPPEY, Iowa, Sept. 27, 2019 — Gillum S. Toliver, born in 1840, was a youth of 14 years when he settled in Greene County with his parents. The Greene County Historical Society has a copy of a diary kept by Toliver, and this is his description of the North Raccoon River, and the surrounding land:

“The river afforded more water and it was a more swift-running stream than it became after the country was settled. There were no dams on the river then. No stock had crossed it. Nothing but the wild game had disturbed it. The lands had not been plowed, so little of the soil reached the river to make the waters turbid. When the rains and snows fell, much of the water ran off through the rivulets, gullies, ravines, branches and creeks. More water reached the river than was the case after the land was put under cultivation. The North Raccoon River was a clear rapid running stream, and its bottom was generally covered with white sand and gravel. Then you could frequently see a fish, as far as across the river, in two feet of water.”

The prairie, when first seen by young Toliver, was covered with grasses such as buffalo grass, big and little blue stem, and others having very long tap roots, as much as five to seven feet.

Jerry Hatfield, USDA soil scientist for Iowa, says with current practices, we will run out of top soil in the Loess Hills in 35 years, and in the prairie pothole region of Iowa in 80 to100 years, with current climate conditions. He states, “It took us something like 150 years to lose the first half of our top soil in Iowa.”

High intensity rainfall (defined as over five inches) events occurred throughout the state in 2018, further adding to serious soil erosion, at a rate above five tons/acre/year.

The current soil status is described by Elizabeth Garst, a well-known conservationist from Coon Rapids, as being unhealthy.

“Repeated tillage breaks apart soil aggregates, and current conventional crop practices hurt the soil biotic,” she explains. “Soil biotic is defined as bugs in the food chains, from bacteria to spiders, that along with fungus, become the glue which holds the soil together. Many highly tilled soils in Iowa now take in water at the rate of ¼-inch an hour, while healthy crop soils can absorb perhaps 4 inches per hour. Prairie can handle 10 inches or more. The difference lies in the soil aggregate structure and percentage of organic matter.

“Our soils are increasingly resembling dust,” Garst continues. “The water from unhealthy soils goes across the surface instead of into the ground, exacerbating erosion.”

She says the crop ground “is not armored for this new reality. Terraces, strips, waterways, and buffers all help. Other ways to improve soil health is no-till, extended crop rotations, along with cover crops.”

Several area Greene County farmers are planting cover crops in the fall to provide nutrients for the soil, to hold moisture, as well as diminishing wind erosion. One has to feel remorse when driving in the rural portions of Greene County during the winter, only to see black soil covering the snow drifts in the ditches. Winter cover crops planted in Greene County include radishes that look almost like turnips, up to 12 inches long and white. Additional cover crops planted include cereal rye, wheat, and oats.

Several winters ago, our son David Weaver planted radishes, and we identified several areas in the field where deer had pulled the soil away from the radishes and enjoyed eating portions of the cover crop!

On a personal note, winter wheat was planted on our farm last September and was harvested in July. The field was “second-cropped” with buckwheat. The buckwheat grows very quickly, and provides a thick foliage cover. In fact, it is so thick it smothers weeds, limiting the use of herbicides, and has a high nutrient value, thus limiting the amount of fertilizer to be added. The buckwheat seeds are harvested, and the remaining plant are regenerated into the ground with a chisel plow.

As land stewards of Greene County, many farmers are beginning to use cover crops.

Don’t you pause and wonder what Gillum Toliver would have thought about our new cover crops?

You can comment on this story in the space below here, or write directly to the columnist by email at mweaver235@gmail.com. The author, who lives outside Rippey, is an active member of the Greene County Iowa Historical Society.

RIPPEY, Iowa, Sept. 27, 2019 — Nancy Hanaman, of rural Rippey, will lead a program on “Farming in Greene County: From horse & plow to GPS in the fields” on Friday, Oct. 4, when the historical society meets at the United Methodist Church here.

The program will focus on this historic farms of three families — the Jones family, from the Dana area, and the Youngs and Bardoles from the Rippey area. The Jones and Young families have officially-recognized “Heritage Farms,” meaning they have been in the family’s ownership for 150 years. Roy and Phyllis Bardole have “Century Farms,” with 100 years of ownership, on both sides of their family. 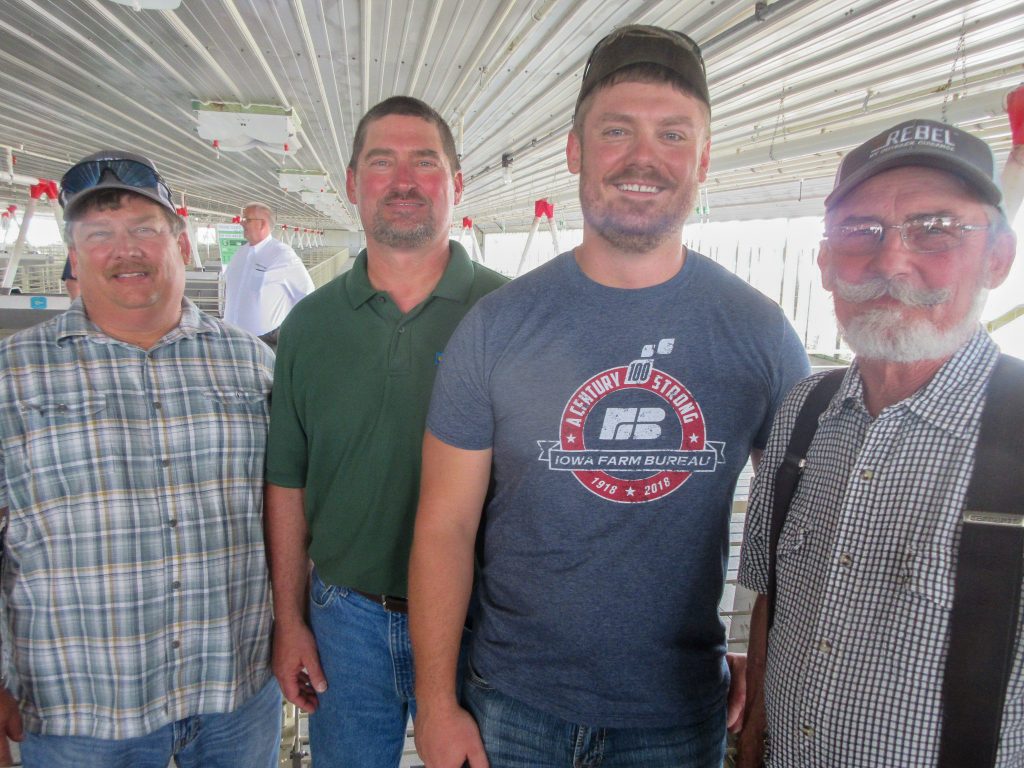 “The owning and operating of farm land by Heritage and Century families is a significant accomplishment in Iowa and Greene County,” said Hanaman, who is a cousin to the Bardoles.

She plans to summarize the Heritage & Century Farm programs that the state has, and will give statistics on the number of such farms in both the state and in Greene County. She’ll then call forward representatives of each of the three families to talk about their farms’ histories. And any other owners of Heritage or Century Farms who are at the program will also be recognized.

There will be lunch served at 12 noon, $8 for historical society members and $10 for others who want to enjoy the meal. Members should RSVP to their community contacts by Tuesday evening, Oct. 1, and non-members who want to come for the lunch should RSVP by calling program director Margaret Hamilton at (515) 386-4408.

JEFFERSON, Iowa, Sept. 3, 1010 — The Greene County Historical Society is hosting another “museum party” this Saturday, Sept. 7, to help welcome another group coming through Greene County as part of a motor tour across the nation on the historic Lincoln Highway.

The historical museum at 219 E. Lincoln Way will be open for its normal Saturday business hours from 9 a.m. to 12 p.m. But it will remain open until 4 p.m. for the special “museum party” through the afternoon. Admission to the museum and refreshments are free, and local people are encouraged to come greet the travelers.

Two weeks ago, on Aug. 24, a tour of more than 50 restored military vehicles made a stop in Jefferson while on their drive across the nation. That tour was sponsored and organized by the Military Vehicle Preservation Association.

The one that will be here this Saturday is organized by the Lincoln Highway Association, and it is expected to bring more custom and antique cars.

Both tours are saluting a 1919 U.S. military convoy, which was led then by a young Lt. Col. Dwight D. Eisenhower, who later became president of the U.S. The troops were exploring how effective the Transcontinental Highway, as it was becoming known, would be for moving soldiers and equipment. That experience is said to have shaped Eisenhower’s thinking three decades later in directing the construction of the interstate highway system.

The people on this latest Lincoln Highway Association-organized tour left the Washington, D.C., area on Aug. 30. They’re traveling up to 200 miles per day en route to a Sept. 16 finish in San Francisco. Their total route of just more than 3,000 miles generally follows the historic Lincoln Highway.

They will be crossing Greene County this Saturday, arriving in Jefferson at about 1 p.m. for a stop of up to an hour. They’ll be parking near the museum. The entourage will be moving between overnight stays in Marshalltown on Friday and Council Bluffs later Saturday.

At the museum, Janice Harbaugh, of Raspberry Ridge Publishing here in Jefferson, will be displaying and selling her line of historical re-publications, which include vintage postcards and other early books that portray the settlement and development of this area. The Greene County postcards have been especially popular with visitors here. Refreshments are being donated by historical society members.