–The traveling display of state history is aboard a “Iowa History 101” mobile resource — a very big bus that the State Historical Society of Iowa now has visiting all 99 counties. It will be at the Bell Tower Festival on Saturday, June 8, from 11 a.m. to 5 p.m. Admission to it is free.

“This exhibition shares some of the essential stories that every Iowan should know about who we are and what we’ve achieved since Iowa became a state more than 170 years ago,” State Historical Society of Iowa administrator Susan Kloewer said. “So we’re delighted to bring this traveling exhibition, and we encourage all Iowans to learn about our state’s rich heritage.”

Like a visit to your grandparents’ attic, the exhibition unpacks stories of Iowa’s past with nearly 50 artifacts, including:

• A battered hat from a coal miner in Marion County.
• A 1917 prototype of the state flag designed by Dixie Cornell Gebhardt of Knoxville.
• The pen Gov. William Harding used to sign the 19th Amendment, giving women the right to vote.
• A basketball jersey that superstar Lynne Lorenzen wore during her glory days at Ventura High School from the mid to late 1980s.
• An Olympic medal from sprinter Natasha Kaiser-Brown of Des Moines.
• A patch from a spacesuit worn by astronaut Peggy Whitson of Beaconsfield.

As a bonus, native Iowan Mike Wolfe, the creator and star of the hit television series “American Pickers,” lent his voice and video talents to the exhibition’s multimedia elements.

—The Bell Tower art show at the historical museum will showcase the work of local artists and pieces from the collections of local art lovers. There are no entrance fees, and the art is neither juried nor judged. “This is a show to showcase our local talents and also for people to share artwork that means something to them,” said Roger Aegerter, the chairperson of the show and the executive director of the historical society. Hours of the show at the museum will be Friday, June 7, from5to 8 p.m.; Saturday, June 8, from10 a.m. to 6 p.m., and Sunday, June 9, from 1 to 4 p.m. Admission is free and people are welcome to browse the museum exhibits, too.

—The traditional spelling bee will be held at 2 p.m. on Saturday, June 8, at the community center. There will be competition for four different age groups – adults included – and there is no entry fee.

The highlight, just as it’s been every year since 1960, was area native Wallace Teagarden, now 96, doing a stirring patriotic oration — without notes — on foundational American documents.

Featured speakers were Jefferson-Scranton 2009 classmates Melissa Bosshart Frederick and Rep. Phil Thompson, both of whom have deep family roots at Pleasant Hill.

The event at the 138-year-old former church is sponsored by Pleasant Hill Memorial Inc. and the Greene County Iowa Historical Society.

You can learn more in the captions to the photos. 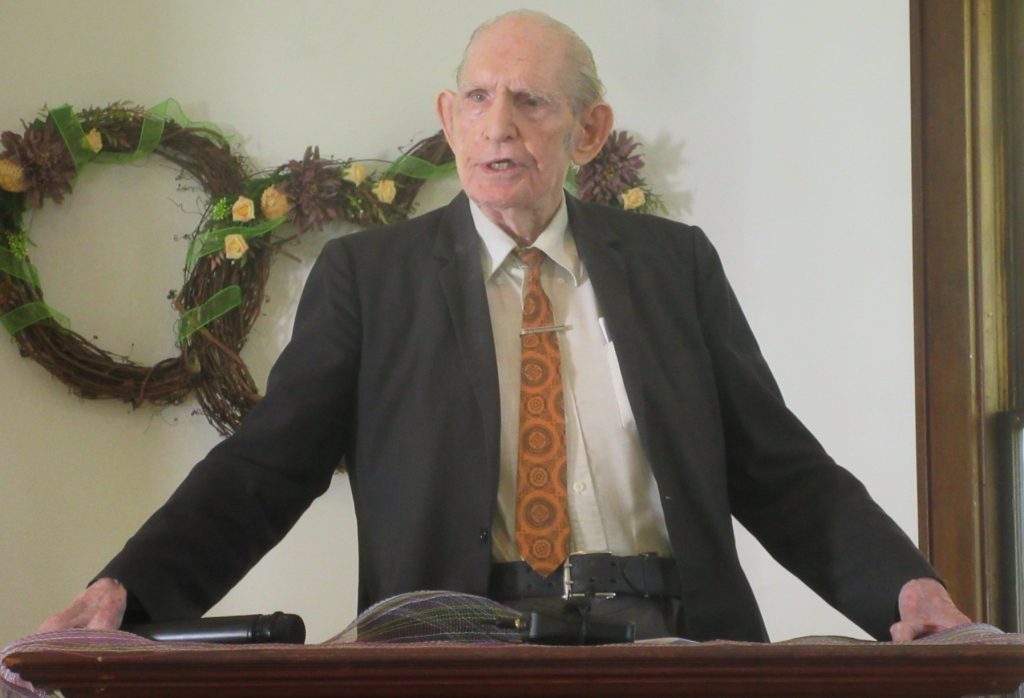 Wallace Teagarden, 96, a 1941 graduate of Grand Junction High, a retired attorney & insurance claims adjustor who has lived for years in Ames, does the patriotic oration he’s been doing since junior high school, reciting excerpts of several important American documents and then the full Gettysburg Address. Teagarden has done this at the Pleasant Hill Memorial Homecomings every year since 1960, and does from memory. His oration this year was flawless, and inspiring as ever.

The annual Pleasant Hill Memorial Homecoming service & potluck dinner will be held on Sunday, May 26, at the 138-year-old pioneer church located about five miles southeast of Jefferson.

The event is presented by the Pleasant Hill Memorial Inc. committee, with support from the Greene County Iowa Historical Society.

Pleasant Hill Church has roots from 1873 when Methodist classes were started to serve the pioneers settling in the area. The church structure was started in 1881, and it has been kept in more-or-less good repair ever since, even though there hasn’t been an active congregation using the church for decades. The neighbors formed a non-profit organization to sustain it.

Peg Semke, president of the Pleasant Hill Memorial board, notes the old church is in a renaissance.

“We’re really grateful for all that’s happened the last two years,” Semke said. “Due to personal donations of time, money, labor and supplies, and a Louis Dreyfus Company grant from the Greene County Board of Supervisors, the interior has been patched and repainted, the windows have been replaced and some refurbished, the basement walls have been repaired, and the original wood floor is very near completion of rehab.”

She said that “going hand in hand with this, we have had increased usage of the church building with weekly Sunday evening services last summer,” led by Central Christian Church from Jefferson. There have also been two Easter sunrise services, Christmas caroling, and a funeral.

“Pleasant Hill Memorial is very grateful to be existing not only as a memorial, but to once again becoming a living part of the community,” Semke said.

Activities at this year’s Homecoming next Sunday will begin at 9:30 a.m. with a revival-like service presented by Central Christian Church, and the public is welcome.

At 10 a.m, there will be coffee, juice and Marianne Carlson’s Iowa State Fair champion cinnamon rolls served in the church yard, with music by the Central Christian brass ensemble.

At 11 a.m., the official Homecoming service will be held back in the church with congregational hymn singing; a special musical salute to veteran and service members led by Mark and Rita Rasmussen; an invocation and benediction by Rev. Dale Hanaman of the historical society, and brief messages from three guest speakers:

–Melissa Bosshart Frederick, 28, who now lives near the southern border of Greene County, grew up a mile north of Pleasant Hill, graduated from Jefferson-Scranton High School in 2009 and the University of Iowa in 2013. She was a candidate for Greene County supervisor last fall. Melissa and her husband Bill Frederick are raising baby daughter Leah on their farm in southern Greenbrier Township. She continues her strong personal ties to Pleasant Hill Church. “My mom and dad got married there, we’ve always been good friends with the Semkes and they got married there, the funeral luncheon for my great-grandpa was in the church, and my husband Bill and I got married there,” she said. “It’s always been a special place in my life.”

–Rep. Phil Thompson, of Jefferson, also 28 and a Jefferson-Scranton High School classmate of Melissa Frederick, was in the Army for eight years, deployed to Iraq, attended West Point for two years, and got out as a staff sergeant. He now represents his home area in the Iowa House of Representatives. “Pleasant Hill has always been a special church for my family,” Thompson said. “We attended the Pleasant Hill Memorial service and potluck every year. As a boy, the service stood out as one of my earliest, most vivid memories. I look back on those services and remember feeling so inspired by the church choir filling up the room and the 21-gun salute. It was probably the first community tradition that I fully understood and had deep reverence for. It helped shape my character and desire to serve.”

–And Wallace Teagarden, 96, a native of the Pleasant Hill area who now lives in Ames, says he intends to be back for his traditional patriotic oration. “I’m really blessed in my health, I feel good and I plan to be there as usual,” Teagarden said, then adding his annual caveat: “But at my age, you never know.” He learned his stirring address as a junior high student in Grand Junction, and has been doing it from memory ever since – including at every Pleasant Hill Homecoming since 1960. How does he do it? “Well, I practice it when Memorial Day is coming around,” he said. “And I do my voice exercises every day all year. When you get older and are living alone, your voice can get weak. So twice a day, I count to 100 in a good loud voice. I’ve probably done that for 50 years or longer. If I don’t exercise it daily, I find it gets kind of screechy and scratchy.”

At 12 noon Sunday, after the service, there will be a 21-gun salute outdoors by the Kinkead Martin American Legion Post of Rippey and “Taps” by Sam Bassett on trumpet.

Then there will be the traditional Pleasant Hill Homecoming chicken potluck dinner. The chicken will be provided, but all are asked to bring a favorite side dish and their tableware.
A freewill offering will be accepted to help with the costs of the celebration and the ongoing work on the church facilities.

Also, high-quality prints of an oil painting of Pleasant Hill Church, done during the Memorial Homecoming celebration in 2017 by noted Iowa artist Zack Jones, will be sold for $50 in a fundraiser for the historical society.

Following the dinner, the board members of Pleasant Hill Memorial Inc. will have their annual meeting in the church. 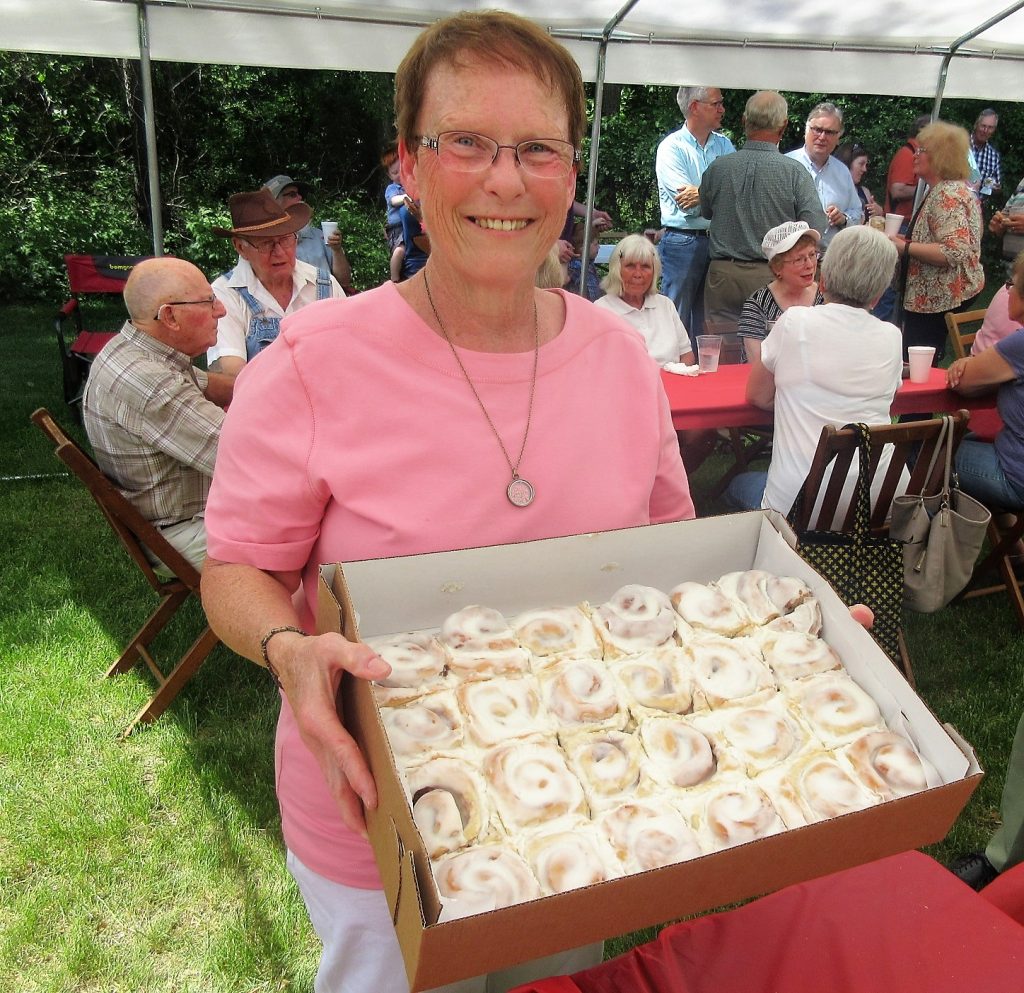 Marianne Carlson will have her Iowa State Fair champion cinnamon rolls available between the services at Pleasant Hill Church, just as she did in this photo from a year ago. 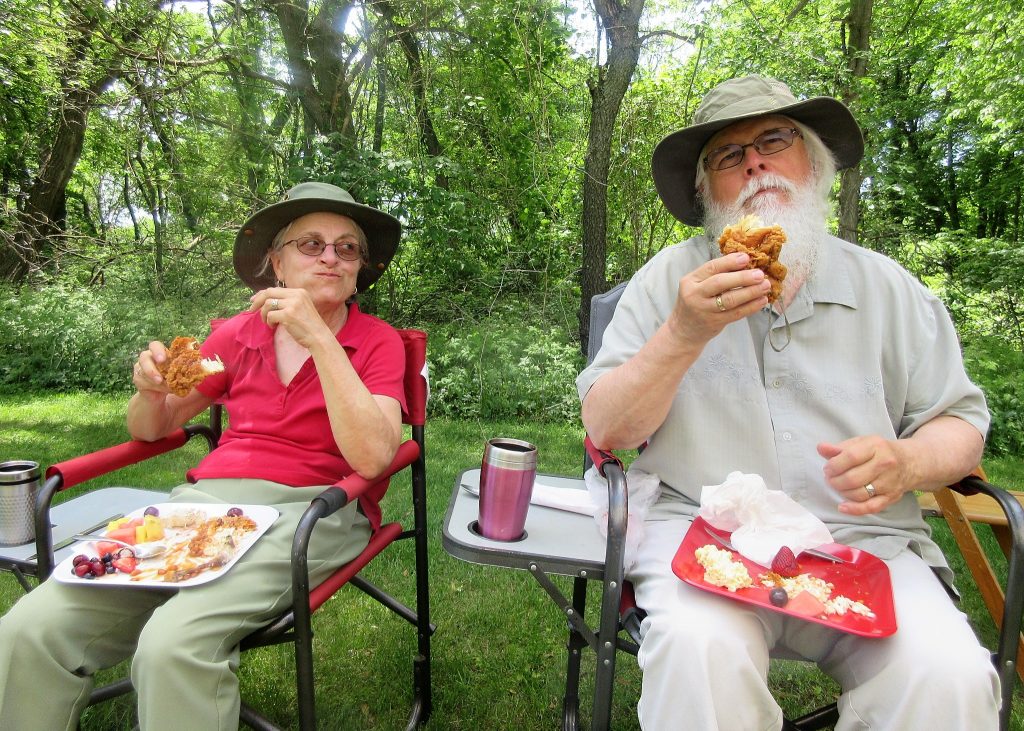 The fried chicken potluck dinner is a grand tradition at Pleasant Hill Church on Memorial Day weekend.  Here, Nancy and Dale Hanaman, of rural Rippey, were enjoying the dinner at the 2018 Homecoming. 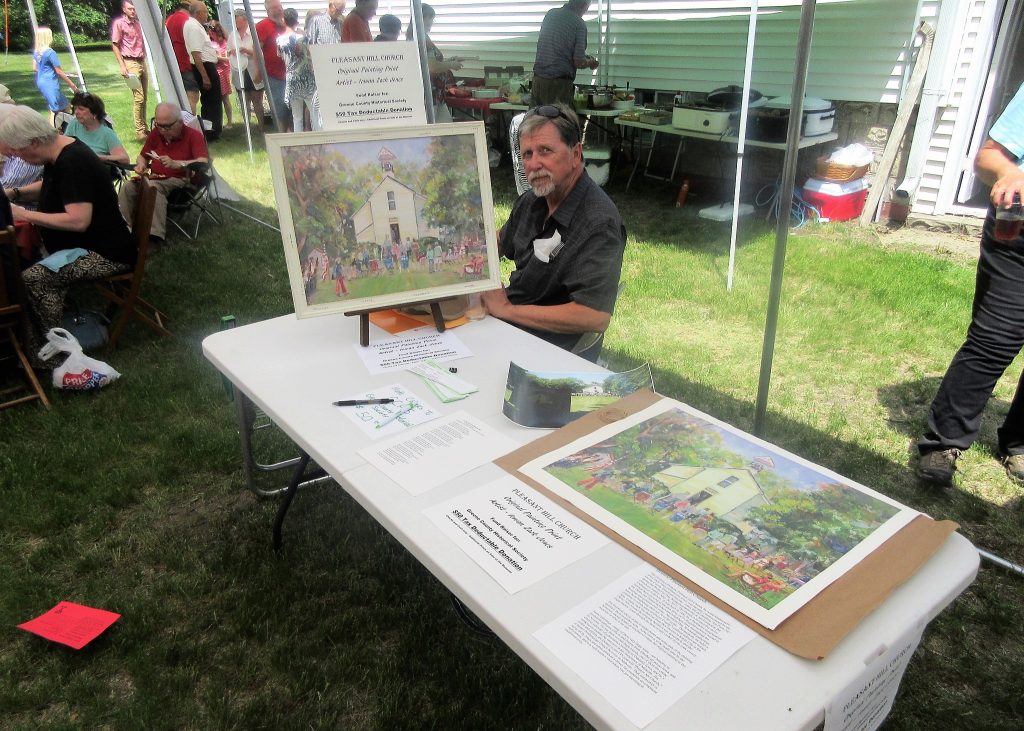 Roger Aegerter, the executive director of the Greene County Iowa Historical Society, had the prints of artist Zack Jones’ oil painting of Pleasant Hill Church available at last year’s Homecoming, and he’ll offer them again at this weekend’s event.

The author Chuck Offenburger, of rural Cooper, is a member of the board of directors of the historical society. You can reach him by email at chuck@Offenburger.com.